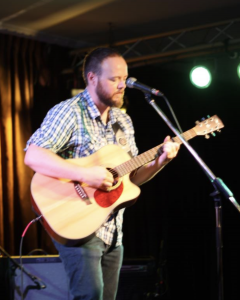 Q:  I really enjoy the instrumentation on “Devil’s Due.” What was the inspiration behind the song?

Goodreid: Musically the song was inspired by Johnny Cash’s At Folsom Prison album. The songs and noises of the prison and Cash’s gallows humour and storytelling lyrics captured my imagination when I was a kid the first time I listened to it. So there is the sound of a prison riot at the start of the song to help immerse the audience and evoke the idea of a prison courtesy of my sound engineer Austin Hein from Orange County, California, who mixed the song. When I was a kid, my religious pentecostal mum would destroy my tapes and vinyl because I listened to the Devil’s music. Music like Led Zeppelin, AC/DC, Wu-Tang Clan, Cypress Hill, Black Sabbath, and Motorhead, so I wanted to add backmasking effects on the song’s tail end as a nod to my favourite bands. These bands made me feel like I was doing something rebellious just by listening to them and really helped me escape from the overbearing and creatively suffocating effect of religion.

Q:  What did you enjoy most about making “Devil’s Due?”

GoodReid: Exploring my battle with cPTSD and social anxiety through my lyrics and how we create our own prisons to stay disconnected from people. I have a challenge with self-isolating and building up walls in my mind to stop me from being with people. Feelings of not being worthy of love and rejecting people before they can reject you can be pretty powerful emotions, so it felt very cathartic to express them in this song.

Q: What was your experience working with bassist Stephen K. Donnelly and guitarist Adrian Whyte?

GoodReid: Interestingly, my writing process is creating a drum loop, then recording the main guitar and vocals. Then I program out the drums using a midi program. After that, I sent it to Stephen in Canada for his bass, then when I got it back, I sent it to Adrian in Melbourne to record his lead guitar parts. Then I sent it to Austin Hein in the US to mix, and he sent it back to me, and I mastered it. In this pandemic world, finding ways to collaborate and create music is vital, and thankfully, the technology allows for this process to happen. Is it perfect? No, but it has made me think outside of the box and lift my skills as a musician and producer.

Q: How did you, Donnelly and Whyte initially start working together?

GoodReid: I have collaborated a lot with Stephen K Donnelly but never actually met him in person. I used Fiverr to find a bass player as I was struggling to find musicians in Norway. Now that I am back in Australia, I struggle to find people who get the music I want to create and have a great feel and professionalism in their musicianship.

Adrian Whyte is actually my guitar hero, and I followed his Youtube channel and have learned a great deal about guitar from following his tutorials. I reached out to him, and we connected over music, and he was generous enough to offer to play on this song and a few others I have in the pipeline. I haven’t met Adrian in real life either as he lives in Melbourne and I live in Perth, but I hope to get to Melbourne one day and jam together in person as he is one of the most encouraging, talented and down to earth person I have ever met.

Q:  What was your favorite moment in making the music video?

GoodReid: That was actually difficult. I don’t love being in front of the camera. Ming Johanson, who directed it, had to push and prod me a bit, but she had a vision of what she wanted and pushed me out of my comfort zone, and I am grateful for that. We think it turned out great, and it was something constructive to do through the quarantine lockdown.

Q: In your own words, how would you describe the music that you typically create?

GoodReid: Songs from my heart. Songs that I hope will move people’s hearts, souls and feet. Modern Retro with a DIY attitude reminiscent of Fugazi. Innovating through the pandemic has really inspired me to create more music. I am definitely influenced by a time in music where everything was new and exciting, but I love to add elements that catch the listener off guard. I watched Elvis movies with my Grandmother when I was a kid, and the melodies of those songs still haunt my head to this day, and it comes out through my songwriting.