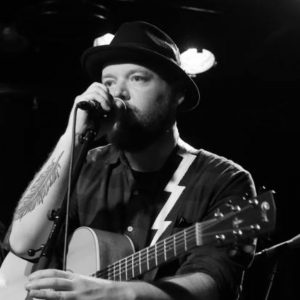 Inspired by his life experiences and fight against PTSD, anxiety, and depression, Derek Lee Goodreid seeks to create music that will connect and inspire people worldwide.

“Devil’s Due” takes the listener on a musical journey where Derek showcases his artistic versatility infusing a nostalgic rock style with rockabilly, country, and blues elements. The emotion-drenched vocals and electrifying guitar riffs seamlessly work together for a must-listen record. “Devil’s Due” contains strong lyricism that will hook the listener due to the infectious story-telling.

Inspired by Johnny Cash, the anthemic distorted guitar riffs with the driving drumline work seamlessly with the powerful vocals. With mesmerizing lyricism, this quickly rising artist maintains a fully charged arsenal of high-quality music, supporting the fact that he is set to make a prominent impact on the music industry and the charts.

This release is a testament to Derek Lee Goodreid’s versatility and his innate talent that is going to take him far in the scene. The release will be available on all digital streaming platforms on April 5th.

About Derek Lee Goodreid
Derek Lee Goodreid is an emerging rock/blues artist originating from Perth, Australia. Derek is poised to make an impact in the scene with his versatile, genre-crossing sound and energy-driven style. Inspired by his life experiences and fight against PTSD, anxiety, and depression, Derek Lee Goodreid seeks to create music that will connect and inspire people worldwide.

The talented artist aims to push the envelope with his sound to make a dynamic style that encapsulates from rock to blues to Americana to rockabilly to punk. With a brief stint in Norway, Derek discovered new genres and styles that are now incorporated into his music. Derek’s lyricism and story-telling ability will have people mesmerized as he radiates raw emotion with his music and will resonate with any listener.

Through every release, the Australian artist will have listeners engulfed in the world he creates with his eclectic sound and style. Derek Lee Goodreid is an artist to keep an eye on and ear out for as he is set to rock the biggest stages and people’s hearts.